"Nagarahole is named after Nagarahole (Cobra river in the local language, Kannada), a winding river which runs eastwards through its centre. Situated in the two districts of Mysore and Kodagu in the state of Karnataka. It was originally constituted into a sanctuary in the year 1955 covering an area of 258 sq. Kms and subsequently enlarged to include the adjoining areas of Mysore district and now extends over an area of 643.39 sq. kms which was given the status of a National Park in 1983.

The birth of Nagarahole National Park can be traced to the notification of 285 Sq. km. Game Reserve way back in 1955, which included the reserve forests of Arkeri, Hatgat and Nalkeri in Kodagu. Subsequently, in 1974, reserved forests from the adjoining Mysore district were added to the Nagarahole Game Reserve, which was upgraded to the status of a National Park covering 643 sq. km"

By Air: The nearest airports are in Bangalore By Rail: The nearest station is in the city of Mysore.By Road: The park is well connected by roads and distances with various cities can be calculated as follows: Madikeri (138 km), Mysore (77 km) and Bangalore (227 km)

From Mysore, either get a Taxi/Cab or get onto any Bus that goes to Manatvadi (Kerala) (Either Karnataka State Transport or Kerala State Transport (and supposed be every ½ hr) and get down at Karapura and call your respective Resort and they will come and pick you up.

To go to Damankatte gate (Antharsanthe) forest department safari point [12.014335, 76.257783] just head towards as if you are going towards Manatvadi but before you there you will hit a T-junction and if you go straight you go to Kabini Dam buta right takes you to Kabini (many Kabini resort boards are there), take a right there and keep going and on the left you will see a restaurant called Tasty (if you are early, best place to break for a coffee or a tea) and this safari point is approx. a km from here. 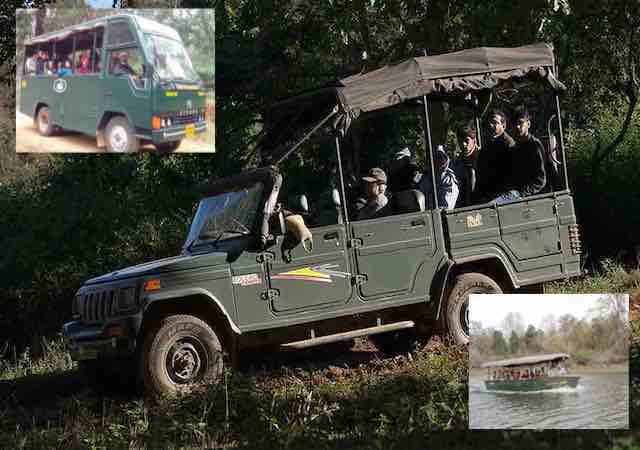 We offer a mix of Jeep, Canter & Boat safari with maximum Jeep Safaris. It's a "MUST" in Kabini as per the order of the Tourism & Forest Dept. You will NOT get exclusive gypsies here unlike other parts of India